As of yesterday morning (GMT), Crimea has officially been annexed by Ukraine in a rather showy and nationalistic ceremony in Moscow. There was lots of rhythmic applause and some standing ovations and a bit of chanting of “Russia! Russia!”. Russia’s Foreign Ministry has stated: “Russia is aware of its responsibility for the life of compatriots and citizens in Ukraine and reserves the right to take these people under protection” and it still reserves the right to intervene on behalf of these compatriots and citizens in eastern Ukraine. While Russia seems to be quite happy with its enlarged borders, the same cannot be said for the rest of the world, or even the rest of the CIS.

Remember 2008, Russia’s previous attempt redrawing borders with Abkhazia and South Ossetia? They were recognised by Russia, Nicaragua, Venezuela, Tuvalu, Nauru, Transdnistria, and Nagorno-Karabakh (two of which are partially recognised states themselves and two of which are very tiny Pacific islands whose loyalties were supposedly connected to aid shipments and cash payments). Tellingly, they were NOT recognised by any of the CIS states, including Russia’s closest allies, Belarus and Kazakhstan.

What happened this time around? Well, Kazakhstan has been pretty unenthusiastic about the prospect of military intervention in Crimea, and Belarus has expressed support for Ukraine’s territorial integrity, yet Kazakhstan’s Ministry of Foreign Affairs has issued a statement expressing support for the results of the Crimean referendum, calling it a “free expression of the will of the population”. These are Russia’s BFFs, and they’re staying pretty low on the radar.

The Commonwealth of Independent States (CIS) is a loose association of former Soviet states, and they all have one thing in common – significant Russian minorities, a vestige of the days of the USSR. Here’s a breakdown (Georgia resigned in 2009 but they’re included for clarity):

In case that doesn’t get the point across, here’s a fun map, too. The red areas are regions where ethnic Russians are the majority. (Yes, it’s from 1994): 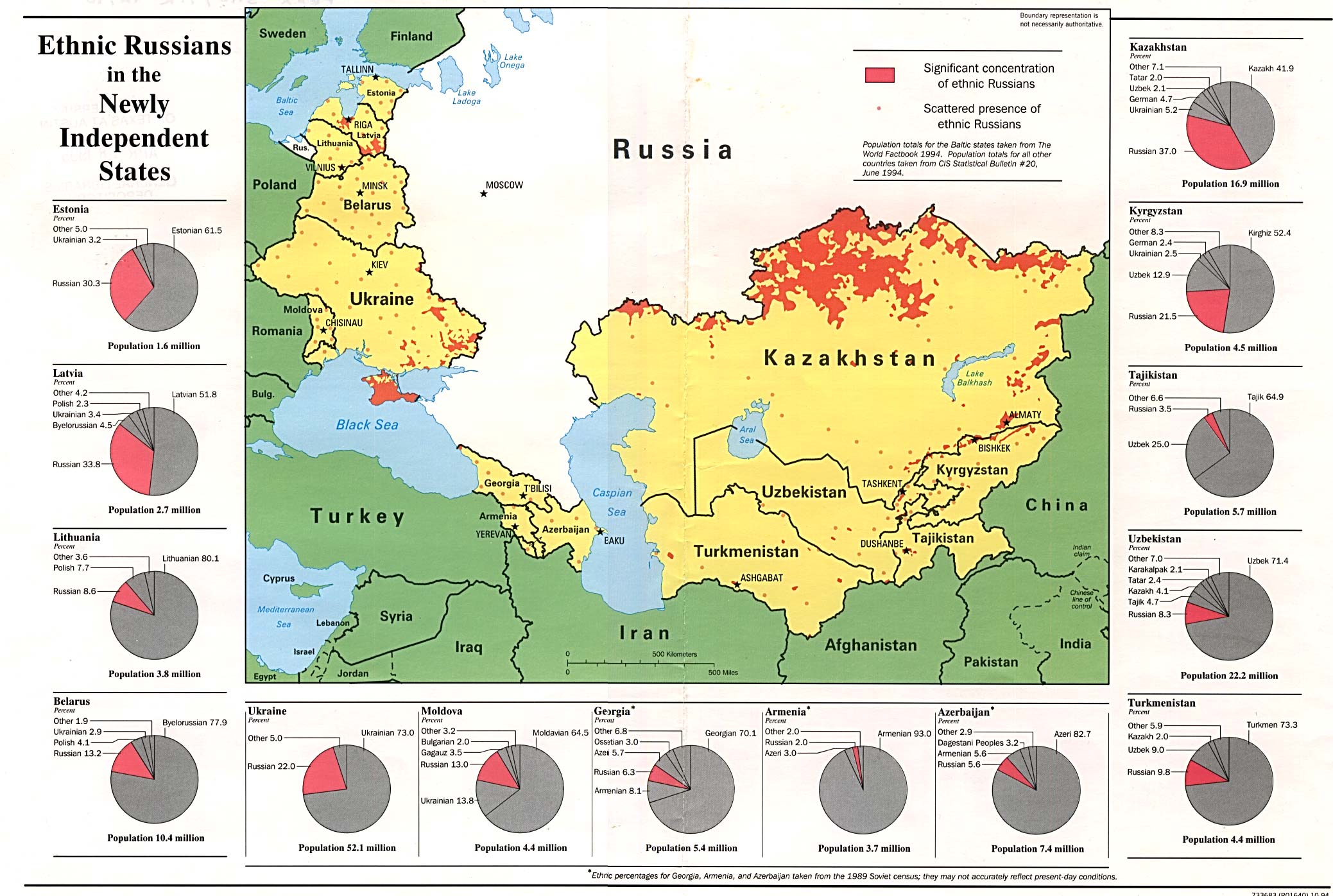 Look at Crimea. That area is RED – Crimea is composed of over 50% ethnic Russians. A lot of eastern Ukraine has red pockets, and so does northern Kazakhstan. There are a lot of ethnic Russians all over the CIS. But remember – Russia’s definition of what people are under its protection isn’t just restricted to ethnic Russians. It also includes “compatriots”, which in Ukraine seemed to include Russian speakers. The percentages of Russian speakers in the CIS states are frequently far greater than the percentages of ethnic Russians due to the Soviet influence. For example, although Armenia’s population consists of 0.5% ethnic Russians, in 2010, Armenia’s Foreign Ministry reported that 70% of Armenians could speak Russian.

Crimea is not the first time that Russia has intervened militarily in a former USSR state – Georgia in 2008 (resulting in Abkhazia and South Ossetia) and Moldova in the 1990s (resulting in Transnistria) are prime examples. But Georgia has a population of 4.9 million and Moldova has a population of 3.5 million – both are significantly smaller than Ukraine’s 44 million people. Not only is Ukraine much larger than the other CIS states, but it also has a fairly powerful military and close ties to the EU. If Russia is able to step into Ukraine and claim Crimea via a referendum with, realistically, very little outcry from the West, then what can it get away with in the rest of the CIS?

Notably, the CIS states have been fairly quiet during the Crimean crisis, although most governments have issued statements supporting Ukraine’s territorial integrity while not outright condemning Russia’s military presence – basically, staying as neutral as possible. Moldova has boldly stated that it does not consider the results of the referendum to be legitimate. The fact is, many of them see the writing on the wall. If Ukraine, with its actively cultivated Western ties, can be so vulnerable, that leaves them in very precarious positions. Many CIS states have few close allies outside of the CIS and are of little practical interest to NATO, the EU, and the US. At the same time, most of the CIS states have leaders who would be reluctant to cede power to anyone else – Kazakhstan’s Nursultan Nazarbayev, who has been in power since 1991 and was re-elected to another 5-year term in 2011, and Belarus’s Alexander Lukashenka, who assumed office in 1994 and is often referred to as “Europe’s last dictator”, come to mind. Both leaders have demonstrated their willingness to work with Russia thus far, but should their territorial integrity be threatened, their stance would likely change.

Russia’s actions in Ukraine make it clear to the rest of the CIS states that it is in their best interests to maintain good relations first and foremost with Russia and Russia’s supranational organisations. Fostering relationships with NATO and the EU that go beyond routine cooperation on economic and security issues have clear and rapid consequences for states that Russia considers in its sphere of influence. By and large, the CIS states are restricted by geopolitics and have no choice but to pursue a close relationship with Russia. But for those who may be considering looking towards NATO or the EU, the cases of Ukraine and of Georgia provide loud warnings that strategic realignment will not come without costs.

Jillian
View all posts by Jillian →